Where: Ithaca, NY and surrounding

Disclaimer: This post may contain crude language and various negative views of humanity. Please don’t read on if either of those offend you.

General note(s): As of this writing all of the parks had a parking fee of $8.00 from (I think) 8am to 6pm, every day. Lots of parking. All have easy to find address for your GPS. It is all pretty, yes but, proper footwear please – most of these trails are wet after all.

Do you remember being a kid and having a disposable camera? Maybe you only had enough allowance for one or your parents could only get you one. Remember taking way to many photos at the start of a trip then rationing photos for only the coolest stuff toward the end. No? Just me? Am I dating myself? We spent so many summers in PA, ME, VT and NH and for each trip I got my very own camera. I would snap everything I could early in the trip and by the end with five or so precious photos left, I would carefully exam everything to make sure it was photo worthy. Getting the cameras developed was another story. I’m sure some are still buried in drawers or in closets. That’s how I treated this trip. I took too many photos early then, by the last park I just wanted to enjoy.

Each park was similar in that you choose from a gorge trail or a rim trail. The gorge trails follow the falls and the rim trails hover above. For each park, since coming back to the area is difficult, I made sure to take both gorge and rim trails. Essentially, each park was explored in its entirety, which, is no small feat. While I didn’t seek to pair a park with a specific eatery like I do at home, the above list is everywhere I ate during the trip. We camped so for a few days, my diet was mostly s’mores and things you can dip into peanut butter. Maybe, also peanut butter s’mores.

When I checked into the campsite, I was told that Ithaca has more restaurants per capita than NYC. I believe this. Downtown seemed to be 90% restaurants, a handful of thrift / buy Cornell merchandise, more vape / CBD shops than necessary. 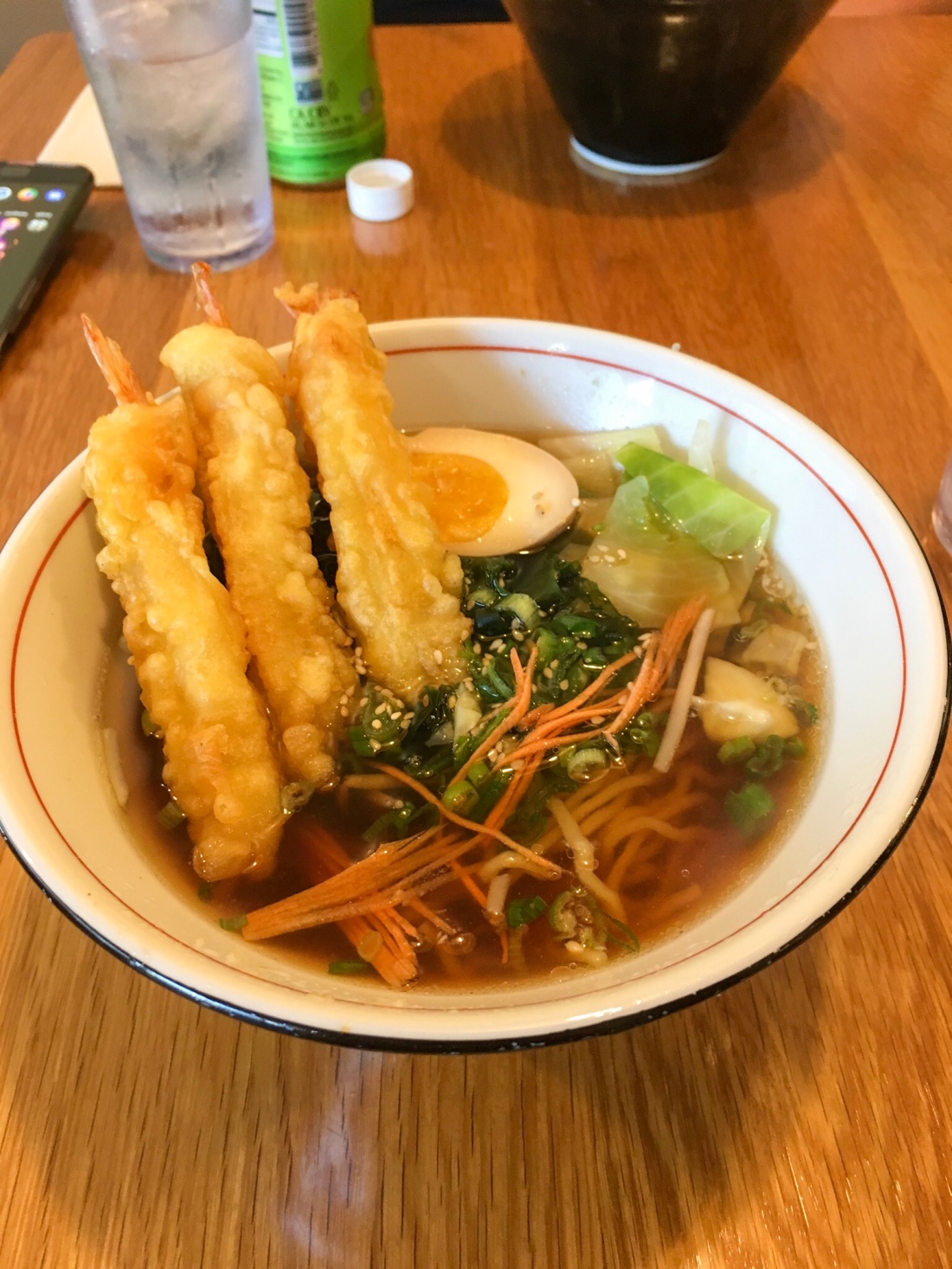 A paragraph about food: The ramen shop was wonderful, flavorful and fast (pictured somewhere). Noodles after a big hike day really seem to hit the spot. Luna was not good, if I lived here I wouldn’t go back (not pictured). Everything was covered in cilantro and my rice tasted like dishwater – maybe a cilantro byproduct since it tastes like soap to me. Gimme! Coffee was great – check the size of that biscotti! But the town was small and most everything was closed. The barista mentioned a local festival coming up and how the town shuts down to accommodate this. He was cool. We could be friends. I’ve never lived anywhere so small and it was fascinating new found knowledge. Gimme is a local chain and also has a location in Ithaca. Glen’s Dairy, felt so wasteful. I ordered a small and the photo is what I got. I spent so much time thinking about wasting ice cream that I couldn’t enjoy it. Foolish, I know but I wager, if it were awesome ice cream I wouldn’t have had those thoughts. My favorite ice cream is what I make in my ice cream maker so, I’m a hard sell. But seriously, if you love big portions, go to Glen’s.

Taughannock Falls State Park: This park is incredibly simple to navigate. They have a boat launch, ample concessions and picnic areas. There is a .75 mile trail running through the center and north / south rim trails that connect. The north and south rims together are about three miles. The stream bed was quiet and signs indicated that you were allowed to walk in it. At least, signs with arrows pointed you to the main trial so I assume if it wasn’t allowed the Park was at least very aware.

The falls are impressive at 215 feet. The rim at Taughannock was the best of all of the parks I visited, allowing for multiple view of the falls from above the falls. 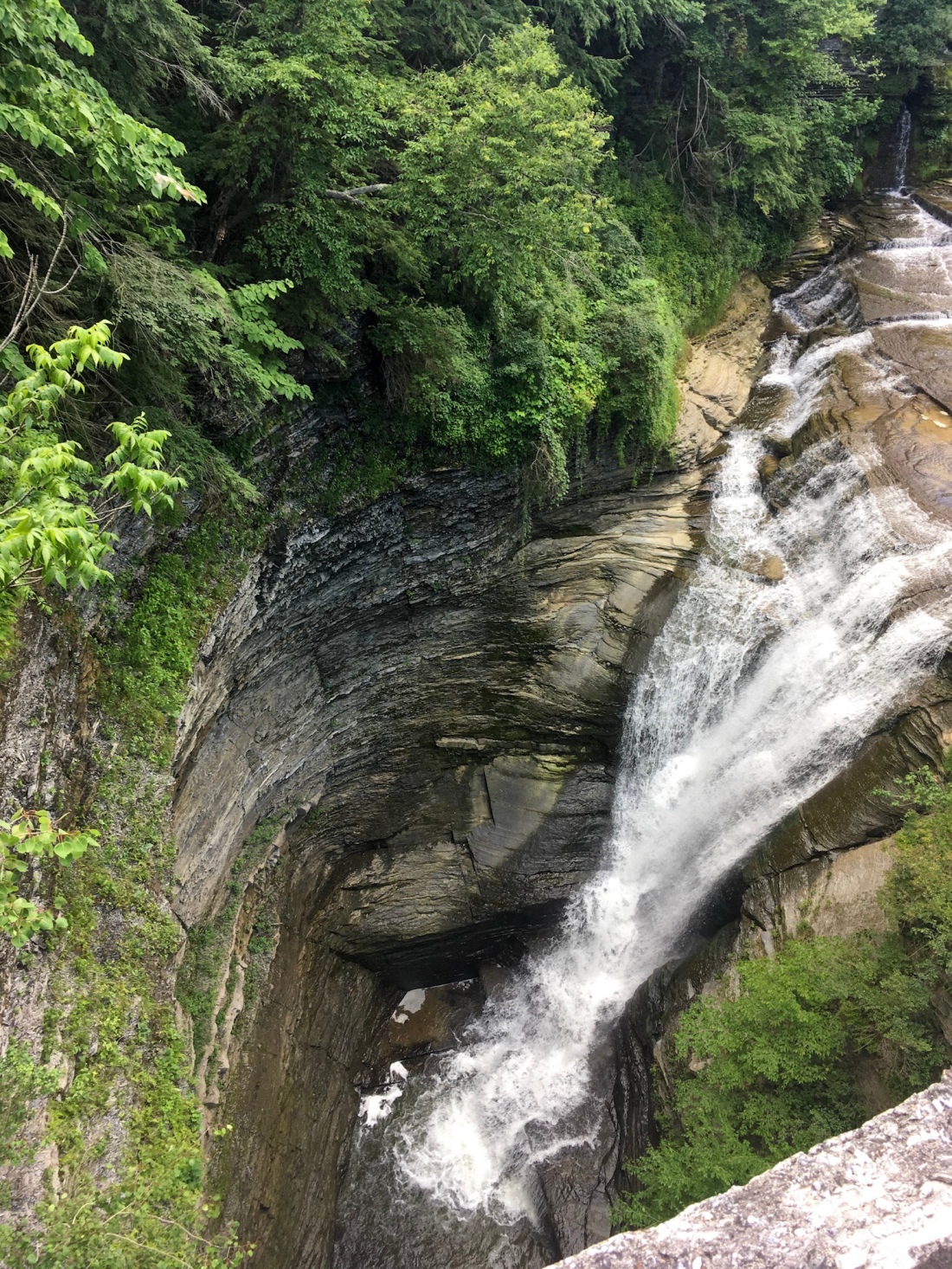 Robert H. Treman State Park: This place is cool! It has a giant swimming hole and adorable cabins. The swimming hole was mobbed and there were so many lifeguards on duty that you’d think it was a local community pool. There was so much joy there.

The coup de gras was Lucifer Falls and there were people hanging out at the base of it. There isn’t a trail to the base of it so they must have walked across the stream. Why do something you aren’t supposed to do when there is a giant, safe swimming hole? I get so frustrated with people. Damn.

Buttermilk Falls State Park: There are two very distinct areas of this park. The rim/ gorge trail area and a lake loop. The trail head I took was accessible from the camp ground and led directly to the lake. The loop around the lake is 1.5 miles. There is an overflow lot with direct access to the lake trail head with restrooms.

From there I walked park roads to the bear trail, across to the gorge trail. It was early enough where the trail was quiet. The water looked so welcoming but, signs dictate if you swim in the stream, you’ll get ticketed. This of course didn’t stop people. From this direction, the largest waterfall was my last viewpoint. At the base of the falls is a swimming hole. We’re talkin’ lifeguards, a diving board, a dog wading area and roads to designate deep and shallow ends. 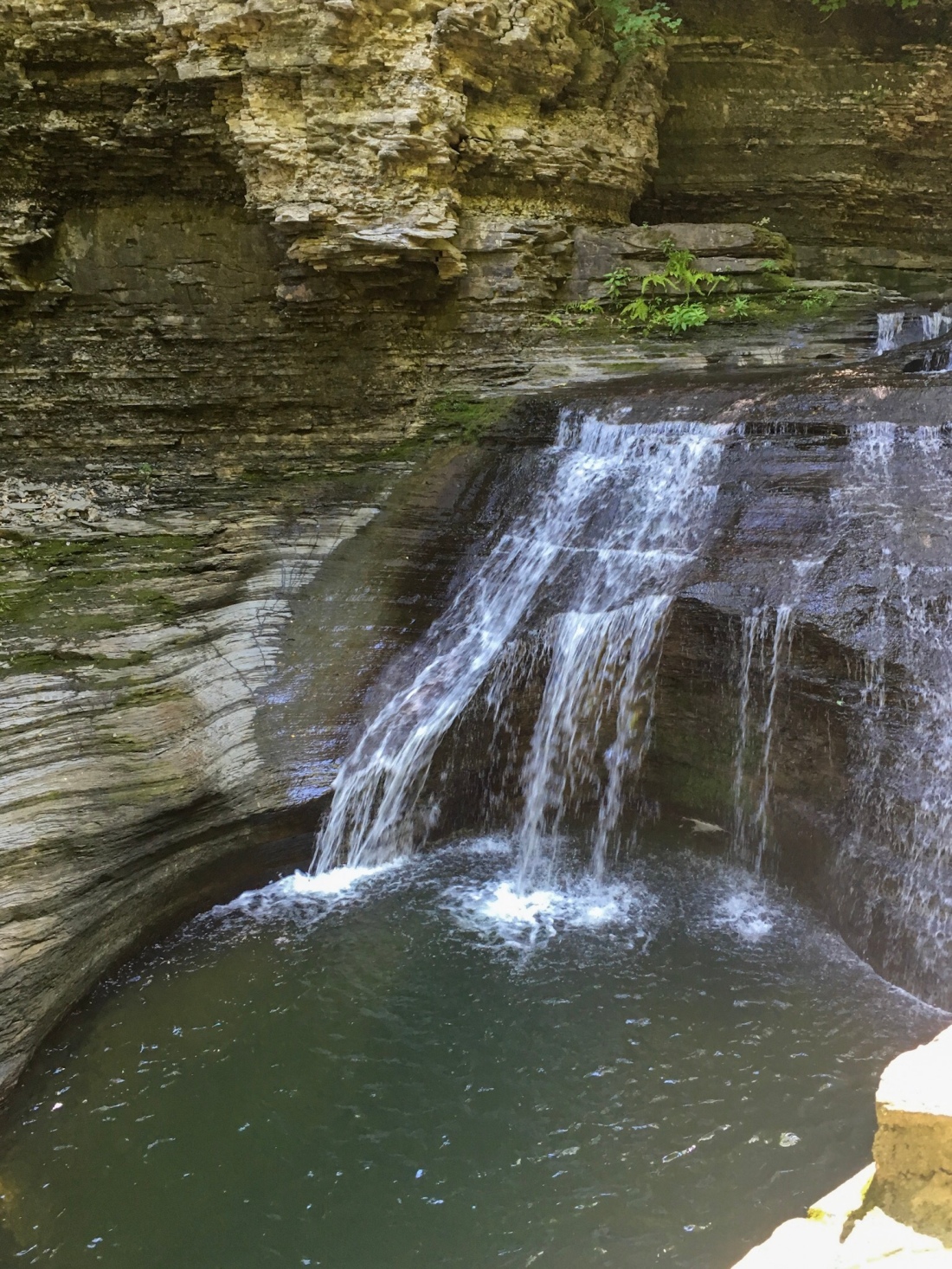 On the way back to camp, park rangers were closing sections of the gorge trail so I felt lucky to see it. 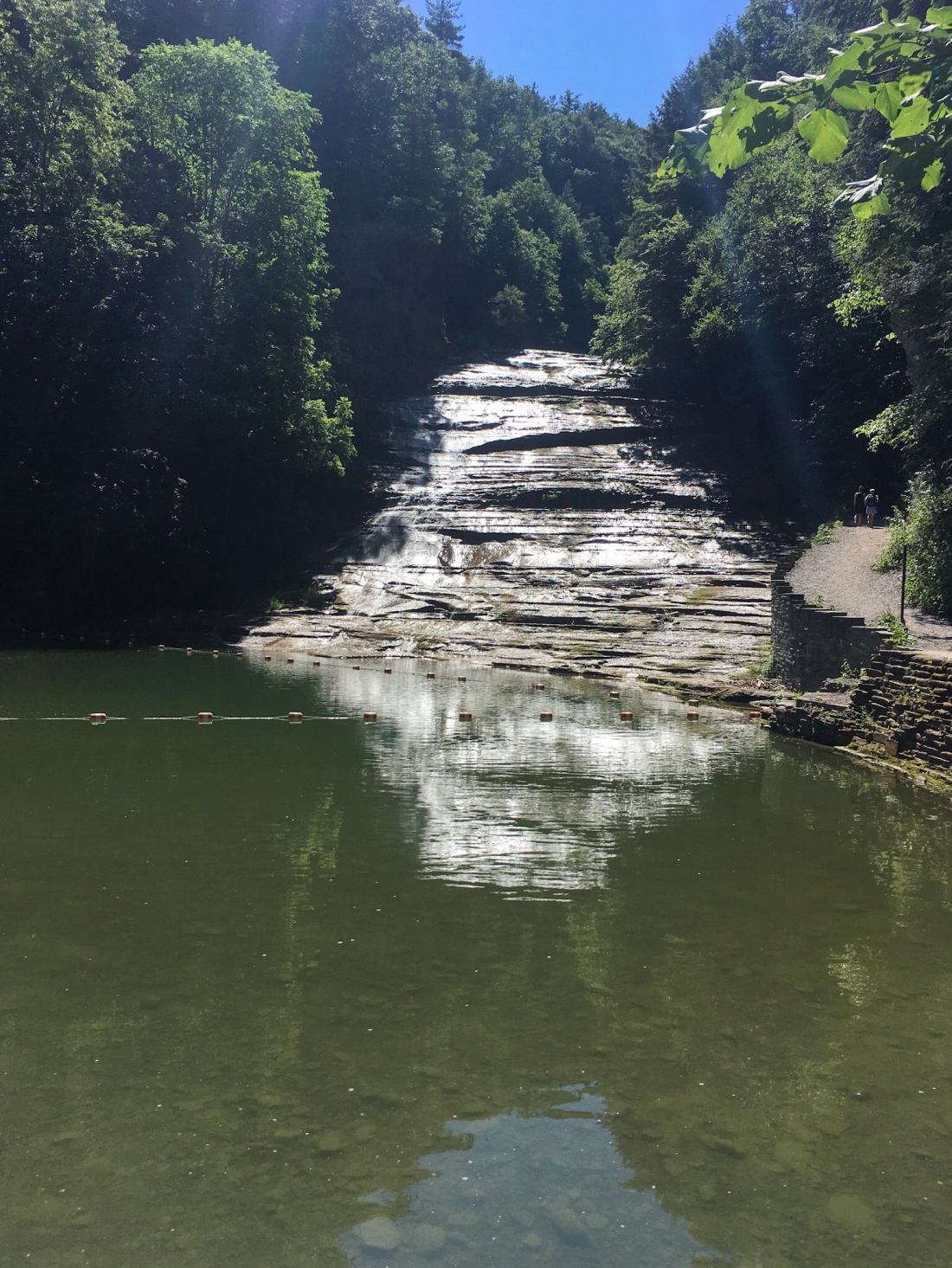 Watkins Glenn State Park: I want to start off by saying how photogenic this park is. It’s gorgeous, truly. But fuck. I hate this park. It was so crowded that there were portions that felt like I was trapped in the middle of a nightclub dance floor. Cameras everywhere. People stopping on wet staircases to take a photo. People falling because the grown was wet and they were in improper footwear. People in the stream. People everywhere. Don’t ask how one of only two photos I’d gotten in the part is void of people. I don’t know how. They were everywhere. I’m in so many photos that I don’t want to be in.

I stumbled upon a cemetery here and it left for an eerie feel. There wasn’t anyone on this part of the trail and I’m not sure if it was actually part of the park. 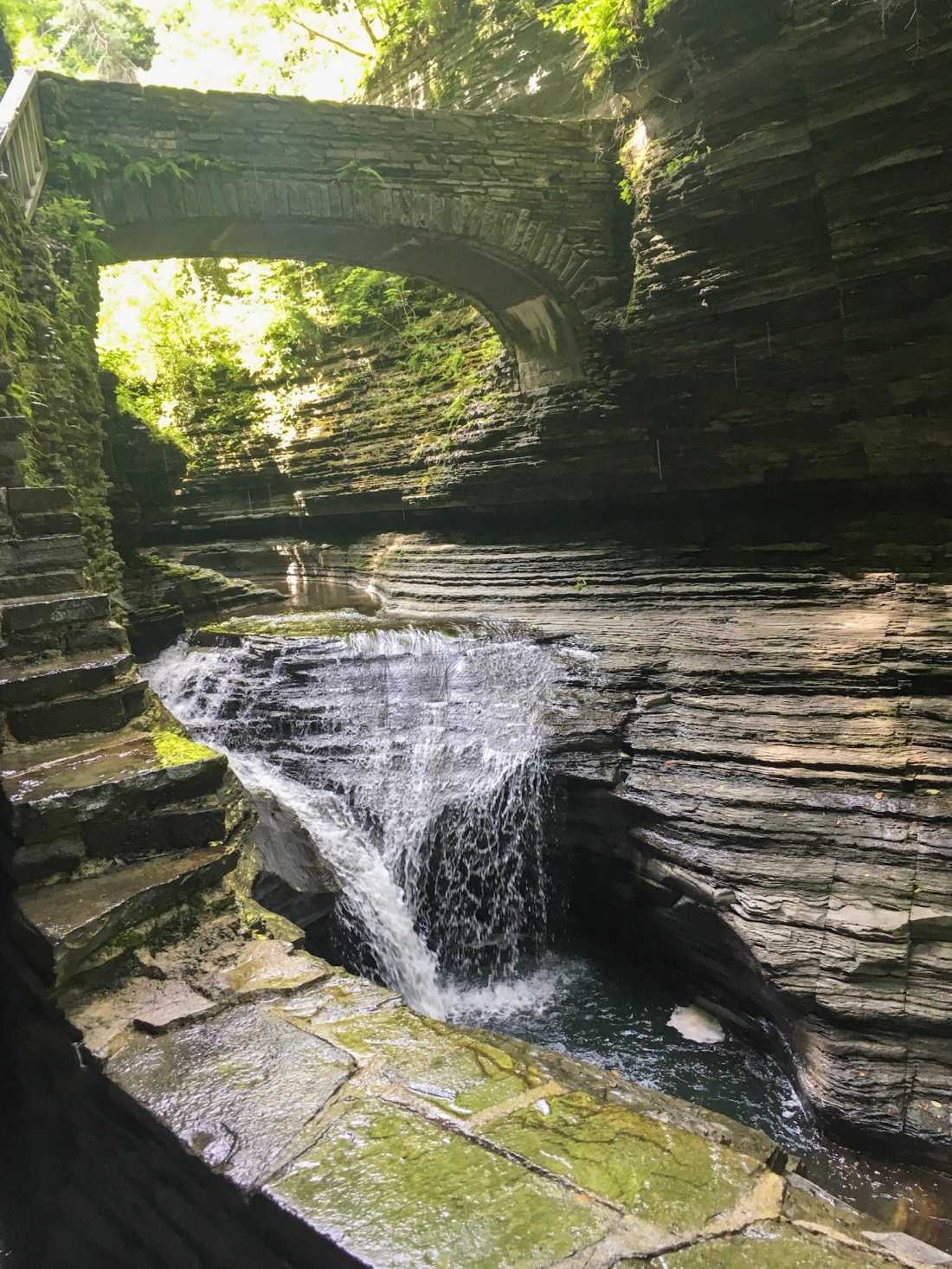 The trails themselves are short, ranging from 1.5 to 1.8 miles, point – to – point. Staircases connect north and south rim trails to the gorge trail. The gorge trail is of course where the beauty and most of the action is. The further you get from the visitors’ center the quieter it gets but if never truly gets quiet. You do however get to walk under waterfalls, so, I guess that’s pretty cool. Remember folks, one foot in front of the other.

See you on the trails,

2 thoughts on “HikeBeyondLI: Ithaca and Such”