Take Sunrise Highway to exit 51 and go south on Broadway Avenue. Wave to the almost defunct Sun Vet Mall. The park entrance will be on your left about a quarter mile south of the Target. It is a nice Target; in case you were wondering.

This is definitely a head up focus on where you’re going kind of park. The trails are well marked but there are a lot of intersections – most of which aren’t listed as official park trails. Some go into residential neighborhoods, one can kind of take you to a train station or into the Girl Scout camp and more still to parts unknown. I love a good mystery, don’t you? Maybe not while I’m alone in the woods. Speaking of mystery, there were a few missing pet posters on the white trail. It creates an eerie feeling.

Sans Souci is French for ‘without worry,’ which is a nice well wish for walking around a park with mystery trails. Officially, the park is comprised of a yellow connecting trail, a 1 or so mile white trail and a 2 mile orange trail. I spent about two hours in the park using the marked trails and testing a few of the unmarked pathways – particularly around the lake.

The orange trail parallels a Girl Scout camp, which makes it very clear that trespassing is not allowed. The grounds beg to be explored but, I’m not telling you to trespass. For a time, the orange trail hugs a lake with an unmarked trail that loops partially around. You get better lake water views from the unmarked trail, but watch your footing as it gets very narrow near the edge of the water.

The white trail, while the shorter of the two is hillier and has some boardwalks over water. You can’t hear busy Broadway Avenue. Sometimes, it is nice to pretend that you aren’t on Long Island.

Lots of folks bring dogs here, they usually mill around by the parking lot and many are off leash. If off leash dogs bother you, I would skip this one. Deeper into the trails, I didn’t pass anyone despite a full parking lot. Otherwise, it is a great little walk with some serene features. 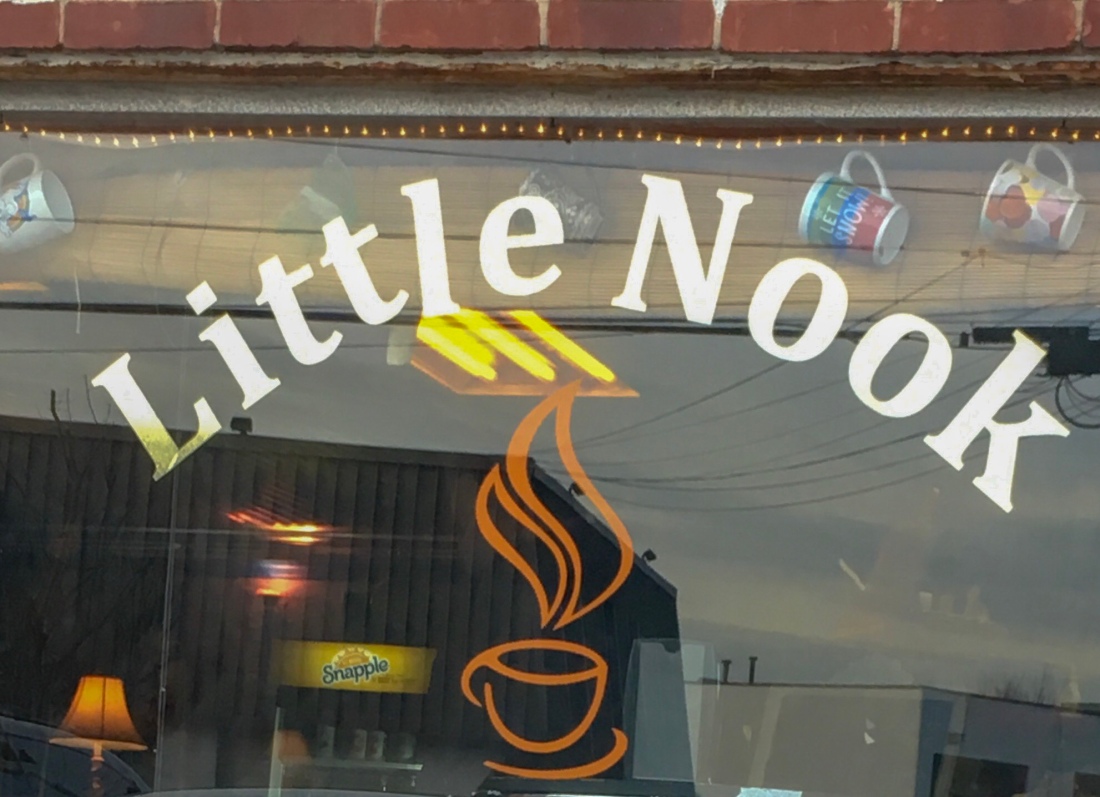 There is no better way to describe the Little Nook Café other than eclectic. Hours listed on the door say 10-3ish don’t let that deter you, just try the door (I think 3ish refers to AM based on their social media but I’ve never asked). They have evening activities like open mic and game nights. You can get anything from vegan pizza (or Nutella marshmallow dessert pizza) to espresso concoctions to so so many sweet treats.

See you on the trails!